A pair of new production stills were released today by Entertainment Weekly and The New York Times: 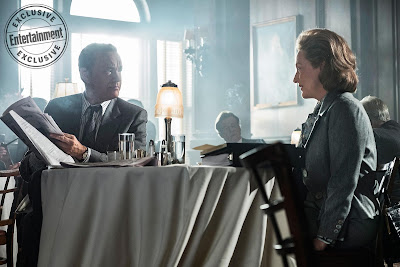 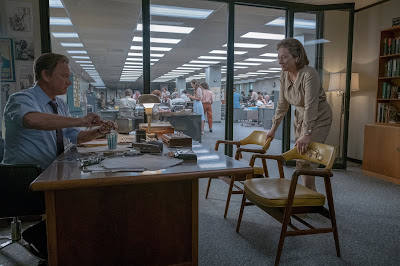 Both are of Meryl with Tom Hanks. I'm guessing the first one might be from one of, if not the very first scene of the film, in which Kay Graham and Ben Bradlee get introduced to us and we learn about their prickly relationship over a lunch meeting. The two photos make the cinematography and production design look very high quality. Janusz Kaminski (director of photography) works with Steven Spielberg on almost all of this films, and the window lighting in the top pic seems very much him.

With the handful of stills that have been released over the past two days, my guess is that we can expect the trailer this week, hopefully sooner than later. Gird your loins.
Posted by Jeff at 9:50 PM