Streep again on the set of "Big Little Lies"

More set pics! The Daily Mail posted some new photos of Meryl filming a scene on the beach in Suasalito, CA the other day. She's with her onscreen grandsons, Max and Josh (played by Nicholas and Cameron Covetti). 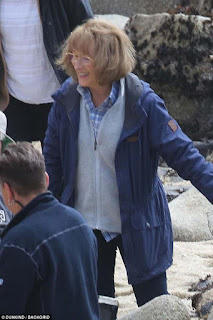 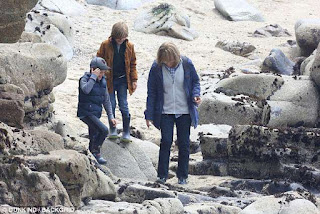 Photos courtesy of Daily Mail.  I've noticed in the last few pics that have surfaced of her on set (particularly the above left) that Meryl seems to be wearing false teeth. They look kind of bucky, presumably to resemble Alexander Skarsgård, who, while being incredibly handsome with a lovely smile, has a tiny overbite. 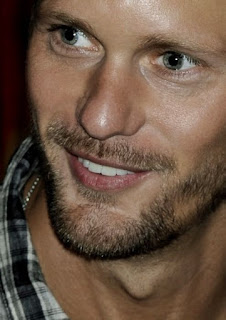 Meryl of course will play Skarsgård's mother on the show, and therefore grandmother to his and Nicole Kidman's character's (Celeste) twin boys. No word yet on when the second season will officially air on HBO.

Check out "Months of Meryl" weekly series at The Film Experience

I've been following the weekly series Months of Meryl over at The Film Experience. Two gentlemen, John and Matt, are brilliantly dissecting every single film role Meryl has been in since her debut in 1977. One or two readers of Word on the Streep have mentioned this series recently, and now that they're through the 80's, I wanted to post about it, mostly to recommend that everyone check it out.

There's been a lot written about Meryl and countless reviews of her performances. I have to imagine that both John and Matt come to this project at relative fans of Streep's work.  That said, they don't hesitate to point out where they think both she, the director or any other actor or filmmaker come up short...even way short. What I've found most enjoyable is how thoughtful and painstakingly they've managed to articulate their opinions on each film. It's way more layered and nuanced than I think I'd be capable of describing...perhaps because I'm biased by my mad interest in Meryl. After all 52 weeks are complete, I think it would be an amazing little book, with photos added of course.

I'm very much looking forward to them discussing her "wilderness years," hoping they go into a bit her rationale for staying local for filming in the early 90's.

Email ThisBlogThis!Share to TwitterShare to FacebookShare to Pinterest
Labels: Months of Meryl, News

Poll #7: Will Meryl ever win another Oscar?

For poll #7, I've gone a little bit different route. I'm asking whether readers think Meryl will ever win another Oscar. Everyone has an opinion on this, I'm sure. Off to the right you'll see the options I've provided for the poll.  One could may simply want to answer yes or no, but it's more fun to get as specific as possible in our predictions.

I'll be the first to vote and say that yes, I think she will win another Oscar. My guess is that it'll happen sometime in her 70s or early 80s, as a sort of Katharine Hepburn in On Golden Pond moment. The older she gets, the less likely it'll be a win for a lead role, in my opinion. So with that in mind, I think the safest bet would be for a biopic. My preference of course would be in a book adaptation or original screenplay, but I'm just going off of what I think is the likeliest.

Meryl was spotted alongside Reese Witherspoon and Nicole Kidman filming a scene Monterey for the new season of Big Little Lies. 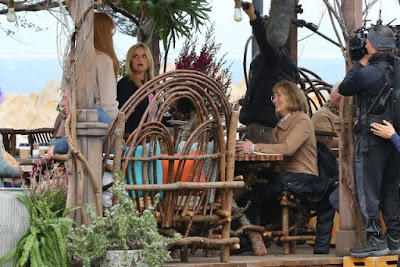 A couple more pics can be seen here. No official word yet on release dates, but I'm guessing season 2 will debut on HBO around February, 2019.

It's been reported that Martin Donovan and Crystal Fox have been cast as Bonnie's parents in the currently-filming second season of HBO's Big Little Lies. For those who've read the book, Bonnie's (Zoë Kravitz) backstory included a history of abuse, which apparently made her perceptive to Perry's abuse of Celeste and therefore more naturally the one to push him down the stairs. There had been some speculation for a while about who might portray her parents. Many buzzed that it could be either or both of Kravitz's real parents, Lenny Kravitz and Lisa Bonet. Alas, no relation, but it'll be nice to see a deeper look into her character in the upcoming season.

Nicole Kidman posted a photo to her Instagram that includes our first look at Meryl in character as Mary Louise Wright on the set of Big Little Lies.

First day on the set with Meryl and “my” darling boys! #BigLittleLies
A post shared by Nicole Kidman (@nicolekidman) on Apr 5, 2018 at 11:00am PDT

Meryl of course plays mom to the late Perry Wright, who was portrayed by Alexander Skarsgård in the first season. She comes to Monterey concerned for the well-being of her twin grandsons. Kidman's character, Celeste, of course plays their mom.

I have to admit that Meryl's look here is dowdier than I had expected. I thought she'd maybe look super duper posh. It's hard to tell from one photo, though. I maintain that Meryl's character will be an abused person as well, as that behavior is almost always learned. Maybe Perry's father was the same way toward Mary Louise as Perry was to Celeste?  Great character to watch Meryl unfold!

Filming is of course underway on the second installment of HBO's Big Little Lies. No glimpses of Meryl on set yet. In fact, we're not even sure if any of her scenes have been shot. Considering she's a supporting character, I wonder if in her contract she's worked it out to be able to shoot all of her scenes in like two weeks or something. Or maybe just one or two days a week over the course of the filming schedule. I remember when I was an extra in A Prairie Home Companion, I showed up on a Wednesday and learned that Meryl was contracted to film only on Tuesdays. Alas, I didn't get to see her.

Yesterday, several sources had casting updates for the show. The only one I really care about is Robin Weigert, who played Dr. Amanda Reisman. Her scenes with Nicole Kidman in the first season were my absolute favorites. This may be a long shot, but I would very much enjoy if somehow in the second season Meryl's character joins Nicole's for a session with Dr. Reisman. Mind blown. Plus, it's fun that Weigert had a bit part in Angels in America, so this will be a little reunion for her and Meryl.