Ok this is kind of a lame post, but I realized that I hadn't updated the "Accents Mastered' tag since 2012.  The only film I have to add is The Homesman.  I realize she's barely in the film and some may not necessarily think she's using much of an accent, but after the first clip of her performance came out, I remember doing a little research on what someone living in Iowa in the mid 19th century would sound like.  I believed I settled on "Central Plains Midwestern."  Yup.

Streep turns 66 today.  I'm guessing she's spending it at work on the set of Florence Foster Jenkins, which is a great testament to her continued drive to perform and make films.  Of course I would want it no other way.  Here's to many more years of the same! 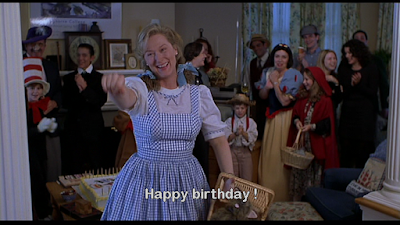 
Just a few days after fans caught a glimpse of queen Meryl on the set of Florence Foster Jenkins, we're now getting a far clearer idea of what her character looks like: Obviously she's wearing some sort of fat suit to look larger.  Ms Jenkins was a tad corpulent in her golden years.  Filming is expected to wrap on the Stephen Frears pic next month.
Posted by Jeff at 2:38 PM 4 comments:

Before I properly begin this post, I want to acknowledge a milestone, in that this is the 500th post of Word on the Streep.  Holy shit!  It'll be four years in August that I started this blog, and it continues to be a thoroughly enjoyable experience.  Thank you to any and all readers.

Okay, so some bad pics of Meryl have been posted online from the set of Florence Foster Jenkins:

I think we can assume that that's Meryl in the pink frock.  Nothing too spectacular.  If you're interested, some clearer (non-Meryl) images are included in a slideshow on the original site.
Posted by Jeff at 8:41 PM 2 comments:

This news is a couple days old and normally I wouldn't find this post material, but French composer Alexandre Desplat is reteaming with director Stephen Frears to score Florence Foster Jenkins.  This guy just won the Academy Award for scoring The Grand Budapest Hotel, and has seven additional nominations, including for The Queen and Philomena.  I just enjoy when Meryl's films include the best filmmakers.

This is a good opportunity to reiterate how nice it is that Meryl has joined forces with some great directors over the past two years.  Say what you may about Rob Marshall, but Into the Woods was highly effective.  Jonathan Demme and Frears's credentials are well-known, and we know Meryl would have probably wrapped Master Class by now with Mike Nichols at the helm.  Based on the trailers, Sarah Gavron is also getting a lot of buzz for Suffragette.  Makes me more excited for the possibility of who might direct The Good House if it happens.  Which it better.

New trailer for "Ricki and the Flash"

Well this was sort of unexpected, but a new trailer has been released for Ricki and the Flash.

There are a few differences from the first trailer.  We see a bit more of the dramatic aspect of the story, concerning Ricki's rough relationship with her family and how that seems to be affecting the difficult situation her daughter currently finds herself in.  Overall, still not a fantastic trailer.  The first at least had a bit more music in it. I'll probably go into this not really expecting much.  At this point I hope I'm pleasantly surprised.
Posted by Jeff at 12:23 PM 5 comments:

A full-length trailer for Suffragette was released this morning:

My first reaction is that this actually looks like this could be a great film. Dramatic, important story in history. Both Carey Mulligan and Helena Bonham Carter look fantastic. Nothing new from Meryl's character, but her role is used to its fullest in the cut here. I'm cautiously optimistic about this one.
Posted by Jeff at 8:13 AM 5 comments:

I'm a little pokey getting to this, but we've gotten our first pics from the set of Florence Foster Jenkins: 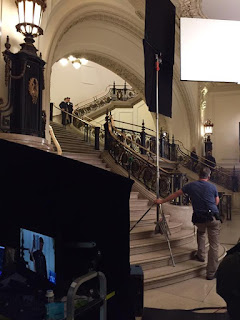 No other glimpses of Meryl yet!  Filming will take place through July.  No word yet on expected release dates.