After it was announced last week that The Post was to be given a limited release on December 22 of this year, articles began removing the title "The Post" from their descriptions.  I had originally thought that this was in error, but it now appears clear that they are likely going to change the title.

I imagine this change is meant to draw better attention to the nature of the film's story.  Considering the film was optioned just last month, has yet to shoot and already has a release date inked in...the powers that be likely want this to capture as much of the current political climate as possible.  Were the film to be called something like "The Pentagon Papers" instead, it might be a bit more alluring (at least to American audiences I suppose).

IMDbPro lists the "The Post" as the film's working title, with "The Pentagon Papers" and "Untitled Steven Spielberg Project/Untitled Steven Spielberg Pentagon Papers" as 'world-wide' working titles.  I'm interested to see if the new name will make it seem more captivating, or help draw the mind away from thinking it's just about a team of journalists working against a powerful foe, similar to the recent Best Picture winner Spotlight (which I absolutely love).  We'll find out soon enough I should think.  Until we do, for the sake of ease, I'll continue to refer to this project as The Post.
Posted by Jeff at 12:28 PM 9 comments:

Variety is reporting that The Post will be given a limited release on December 22 of this year and then be expanded nationwide three weeks later, on January 12.  As we were expecting, this will make the film eligible for the 2018 Oscars.  No official word on the exact date filming is set to start, but considering this news, I expect it will remain on schedule and begin sometime in May, as previously reported.

Strangely, the article cited states that the film is currently untitled, calling it "Steven Spielberg's untitled Pentagon Papers drama."  I imagine that's just bad reporting, and that they're not changing the name of the movie.

Looking forward to info on casting soon!
Posted by Jeff at 1:35 PM 2 comments:

It's been over a month since the first production still was released from the set of Mary Poppins Returns, and in the past couple of weeks there have surfaced some new pics as filming progresses.

There was also a brief video uploaded to You Tube of a night scene of "chimney sweeps" riding their bicycles in St. James Park:

Despite these few morsels from the set, what we're really interested in is getting a glimpse of Meryl in costume. Well, I haven't found any of of those (yet), but based on the following Instragram photo from Sri Lankan lawyer Aritha Wickramasinghe, it appears that she is currently in London, presumably there to film.


It's not much, but it's somethin'!  My guess is that she's wrapping up her few weeks of filming and then heading back to the States by May to begin shooting The Post.

Last week, the documentary Five Came Back was released on Netflix.  I don't tend to post much about side projects Meryl does that don't directly involve her acting, but having watched this film, I thought it best to make mention of it.  Based on the book by Mark Harris and directed by Laurent Bouzereau, the three-part series covers five Hollywood directors' experiences in World War II (Frank Capra, John Ford, John Huston, George Stevens and William Wyler).  In it, we're opened to the American public's perception of the war prior to official U.S. involvement, how films ended up bolstering support for U.S. participation and how these directors were utilized to capture the war's countless atrocities.

Five contemporary directors (Francis Ford Coppola, Guillermo del Toro, Paul Greengrass, Lawrence Kasdan and Steven Spielberg) offer insight into the historical influence and impact of the aforementioned directors.  The series is a compelling, sobering  representation of the undeniable way film can affect each of us.  It's also currently playing in select theaters in New York and Los Angeles to qualify for Oscar recognition.  Check it out. 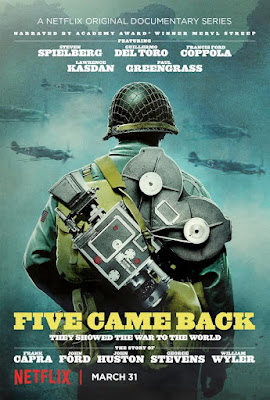 Email ThisBlogThis!Share to TwitterShare to FacebookShare to Pinterest
Labels: Five Came Back, News

Streep leaps to the top of the 2017 Best Actress race

I realize that it's only the first of April, and that The Post isn't even supposed to start filming until next month.  However, last month's news of Streep's participation in the film with Steven Spielberg at the helm and Tom Hanks to star, followed shortly after by the announcement that it is slated for a 2017 release, shot Meryl to the top of many people's predictions of who will make the cut for an Academy Award nomination.

My go-to site for Oscar prognostication, Awards Watch, updated its monthly voting tally today and Meryl is currently in first place not only among all users, but among the site's Gold Rush Gang.  It's still early in the voting but considering that in last month's poll, Streep's name wasn't even on the list of options, I'd say she's sparking a lot of confidence with predictors.

One would have to be foolish at this premature stage of the race to not include Meryl in the top five of predictions.  A script that came in tied for second place on the Hollywood Blacklist, Steven Spielberg, Hanks, biopic, political drama about freedom of the press...seems like a slam dunk for our girl this year.  Again, it hasn't even begun filming, but assuming it indeed gets underway next month, it's likely going to be a year with every other actress playing catch-up.
Posted by Jeff at 7:50 PM 7 comments: