First official social media reactions are favorable for "The Post"

The stupid "social media sentiment" embargo for The Post was lifted last night, and since it has already screened to a large number of Academy members, SAG members, critics, journalists and various other media outlets, everyone is now tweeting out their initial thoughts.  Entertainment Weekly has a nice crop of the generally positive reactions here.

Of course not every opinion praises the film, but I've read through several articles, including over a dozen pages of comments on Awards Watch, and the general sentiment is definitely that the film is very good. More exiting, however, is that Meryl is being almost universally praised for her understated performance as publisher Katharine Graham. Many are saying it's her best performance in a decade, and that she's by far the best thing about an already good movie.

This is a big deal, folks. We'll know more next week when official reviews can be published on December 6, but Meryl is almost guaranteed a nomination at this point with the feedback we're getting. If Streep is generally raved for her performance, the film reviews result in a Rotten Tomatoes score above 80% or Metacritic score above 80 and the box office ends up being over $100 million, without even mentioning the combined pedigrees of the filmmakers/cast and an extremely topical subject matter, not only will the picture be in contention for the top prize, but so will Meryl for her record-tying fourth Academy Award. 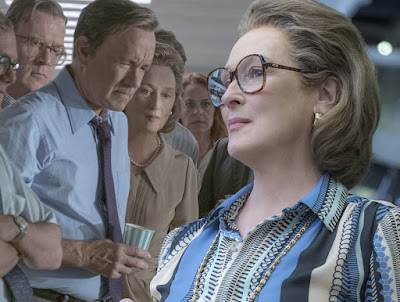