Things have sort of turned the corner this week for the Oscar race. Every eligible contender has been screened and the Best Actress contenders are therefore becoming increasingly clear. Thus far in my posts regarding Meryl's challengers for her fourth Academy Award, none are likely to actually be nominated (Salma Hayek, Emma Stone, Judi Dench). Over the long holiday weekend, I managed to see a few movies, two of which are almost certain to be recognized with a Best Actress nominee.

The day before Thanksgiving I caught a matinee of Lady Bird. I happen to find Saoirse Ronan to be one of the most delightful actors working in film today, and was excited to watch her fabulous lead turn in Greta Gerwig's solo directorial debut. The film revolves around Christine, who's shucked her parents' given name and chosen to call herself "Lady Bird," and her high school coming of age story set in Sacramento. For more on the specifics of the plot, check out the Wikipedia page.

First off, this cast is filled with actors whom I adore for one reason or another. Ronan's appeal I've already mentioned. Lauri Metcalf holds a soft spot for me, as I was and am a huge fan of Roseanne, and although I'll always see her as "Jackie," she was a marvel as Christine's mom, Marion. I didn't know Lucas Hedges was in the film prior to seeing it, and after last year's Manchester by the Sea (possibly my favorite of 2016), I'm happy to see him in any flick. Tracy Letts, who portrays Christine's dad, was of course was the writer of August: Osage County, which means his brain was essentially responsible for one of Meryl's Oscar nominations. And finally, Timothée Chalamet plays sort of a scuzzball to whom Christine loses her virginity, and happens to star in a likely Academy Award-nominated lead role in Call Me by Your Name, which I've yet to see,but have read the book on which the film is based, and absolutely loved.

Anyway! I'd be shocked if Ronan weren't nominated for every major precursor as well as the Academy Award. That said, I'd be equally shocked if she won the Oscar. But her fans shouldn't fret. If she's nominated for this role, it will be her third before the age of 24. Knowing this, I imagine it's only a matter of time, considering her skills and the variety of roles that attract her interest, before she's on the podium receiving her first little golden guy.

Although I've only seen one of the following five performances, the collective internet "wisdom" has these fine ladies as the leading contenders for Best Actress in a Leading Role:

Sidebar: the "social media sentiment" embargo for The Post is lifted tomorrow (Monday), so we'll have a few more specific opinions from individuals who've seen the movie. We'll have to wait for actual reviews until December 6th, unfortunately. 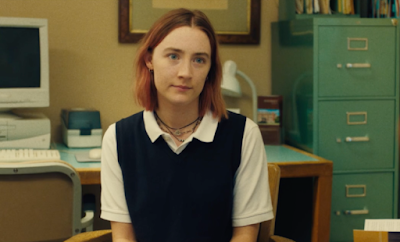