New pic from the set of "The Papers"

A new pic has surfaced of Meryl in costume as Kay Graham in Steven Spielberg's The Papers: 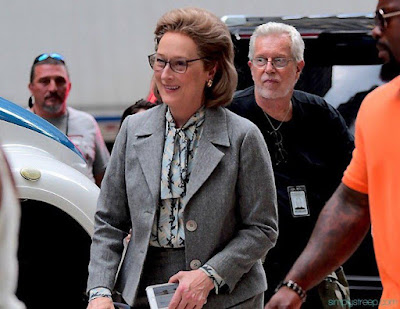 I think the glasses might be Meryl's, but obviously the rest is pure character.

There's certainly been a lot of chatter on awards blogs about not only Meryl's role but the entire pedigree of this film.  Speculation is that this will contend for Best Picture, Director, Screenplay, Actor and Actress.   I want more than anything for this movie to be big deal and of course bring Meryl a lot of acclaim, but the pessimist in me is cautious.  We've been in the position before where expectations were super high for a film (see A:OC) and it not delivering in all departments.  Here's hoping The Papers is the real thing.