It has been since March of 2014 that I've made an official entry to this blog section.  What's prompted the update?  Well, over the past several weeks I've been revisiting the list of roles I've kept of characters (whether real people or fictional) I'd love to see Meryl portray.  I have a more specific intention for revisiting this list, but I'm not going to get into that quite yet.  Suffice it to say that I'll be taking on another fairly extensive Meryl project, not unlike my Reimagined Filmography.  More on that in the future.

Having the day off from work yesterday for Independence Day, I found myself doing a deep dive of the "rumored projects" section of the Meryl Streep Forum.   It was a good review of some things I already knew, but there were many roles or potential projects that I had never heard of!  Most of them were indeed simply rumors.  Others turned out to be the real deal.  One role in particular that she was rumored for, based purely on fan speculation, was a biopic of Brazilian author Clarice Lispector.

I had never heard of Lispector prior to yesterday.  Reading that she was Brazilian quickly made me wonder if it would be appropriate for a white person to portray a Brazilian, but Lispector was actually born to Ukrainian parents (in Ukraine) and emigrated to Brazil as an infant.  Of course my mind immediately went to "OMG I wonder what she sounded like?!"  So I promptly went on YouTube and watched a portion of the only television interview she ever did, which took place in January of 1977, less than a year before her death, one day before turning 57.

Why this character?  After reading about her background, life events and personality, and having watched her interview online, she seems like an absolutely fascinating individual.  Leaving post-WWI Ukraine with her family as a baby, growing up Jewish, frighteningly intelligent, possibly mental illness, physical impairment (she suffered severe burns on her right hand after falling asleep with a lit cigarette in 1966), death by ovarian cancer at relatively young age.   Add that to the aforementioned distinct speech she had (one of Meryl's specialties), and it would be very interesting to see on screen.

I couldn't find any info on whether or not she definitively spoke English, but considering she spent a fair amount of time in London and over five years living in the U.S., I imagine she did.  American author Benjamin Moser published an extensive biography on Lispector in 2012 entitled Why This World, which I may just have to check out.  Perhaps I'll get a better idea of how a feature film would've worked out if one were interested in chronicling her later life. 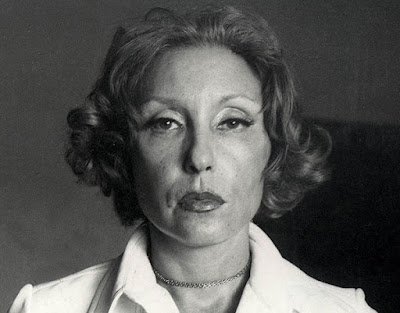