No fourth Oscar, but Meryl shines at the Academy Awards

Everyone and their dog was probably picking Emma Stone to win the Oscar last night in the Best Actress category.  No one, however, expected this Oscar telecast to include the biggest blunder in Academy history, when La La Land was incorrectly announced as the winner over Moonlight.  We all know now that Warren Beatty was accidentally given the "other" copy of the Best Actress envelope instead of the Best Picture winner.  Personally, I think it's a rather simple mistake and hope no heads rolled over it.  I just wish Beatty or Faye Dunaway had had the wherewithal to say "hey, this says Emma Stone."  But, anyone could've been confused by mistake.

Meryl had a few nice moments.  Host Jimmy Kimmel started a standing ovation for her, sort of throwing-it-in-the-face of President Trump for his preposterous claim that she's overrated.  I also haven't really commented on the whole Karl Lagerfeld fiasco because, quite frankly, it's a slanderous attack that Meryl quickly squashed.  She ultimately decided on Elie Saab and looked lovely on the red carpet.

I think it may be a while before we see Meryl nominated for an Oscar again.  Even if she somehow got a supporting nom for Mary Poppins Returns (which I highly doubt), that nomination wouldn't happen until 2019.  Maybe we'll have to settle for recognition at the Emmys before then for The Nix.  Rest assured that any news on a lead role will promptly be covered on this blog.  Until then, happy Meryling. 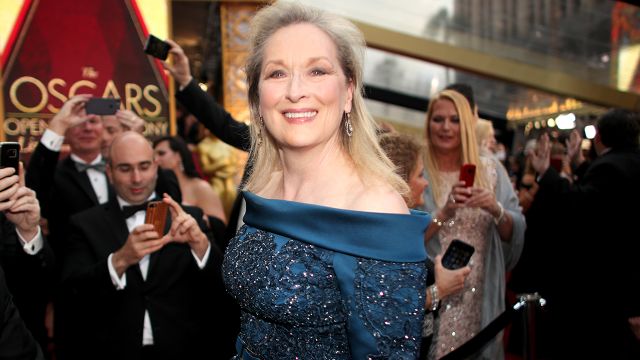