Thinking about Susan B. Anthony

Last night went the opposite of how I had hoped.  Like many this morning I felt sad (still do), disappointed and disturbed by the election of Donald Trump over Hillary Clinton for president of the United States.  Frankly, I'm embarrassed for my country.  In some small way maybe posting about this will provide a bit of catharsis.  I saw a quote earlier today that read something like "it's not the political loss we mourn, it's the loss of humanity."  That kind of sums it up.  Trump presented himself as one of the worst people I've ever seen request my vote.  His policy plans aside (which are ca-razy), he has unfortunately emboldened an undercurrent of racism, sexism, xenophobia and homophobia in our country.  It's 2016.

That said, I'm not rioting in the streets or telling friends on Facebook to delete me if they voted third party.  We get a choice.  And now we have to allow president-elect Trump the opportunity to lead.  My hope is that we'll be as wrong about his presidency as we were about who was going to get elected.  Let's remember that Hillary Clinton still made history.  She was the closest any woman has ever gotten to being president of the U.S.  It's a shame it didn't happen this time (the reasons for which I won't get into), but I'm trying to be practical about it from an historical standpoint.  That got me thinking about Susan B. Anthony, and therefore Meryl, of course.  Yesterday at Anthony's grave in Rochester, New York, the scene was almost that of a pilgrimage site, with thousands paying respects to this pioneer, on a day where many cast their votes for a possible female president for the first time in their lives. I find solace after Clinton's loss in the fact that Anthony worked most of her long life for a result she was never able to enjoy in her lifetime.  Women's suffrage eventually happened though, in large part due to that work.  We won't always win on the first or second, or maybe even third try.  But each loss can serve to further mobilize efforts to continue fighting for what is right.

I'm sure Meryl is bummed today as well.  We know she was a vocal supporter of Clinton during the campaign.  People are now going to be even hungrier to see a woman take the top office in the future.  I certainly hope for Meryl's and everyone's sake that it happens in her lifetime.  Who knows?  Maybe all the fuss over this election cycle will spark interest in finally getting a film adaptation of Susan B. Anthony and Elizabeth Cady Stanton's work brought to the silver screen, as I've previously wished.  Regardless, starting today I'm sure a lot of us are thinking #ElizabethWarren2020.  Take care of each other, America. 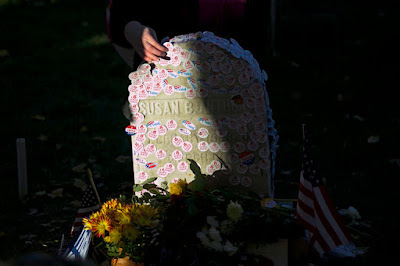