Well this is a surprise.  Multiple sources reported a bit earlier today that Meryl will be the latest recipient of the Cecil B. DeMille Award, given by the Hollywood Foreign Press Association at the Golden Globes ceremony in January.  Although I wasn't expecting this news, it was a matter of time before Streep was chosen for this recognition, so I suppose now is as good a time as any.

One of the fun parts about this is that it's fairly likely that Meryl would be at the ceremony anyway if/when she gets her 30th overall Globe nomination (a record, of course) for Florence Foster Jenkins.  I've been trying think if there has been anyone who received the DeMille Award and also been nominated that year in a regular acting category.  I'm sure it's easy to search out, but wouldn't be surprised if Meryl is the first.

It'll be fun to watch the tribute to Meryl during the ceremony, and this news also adds to the publicity/campaign for a possible 20th Academy Award nom (again, a record) for Florence. 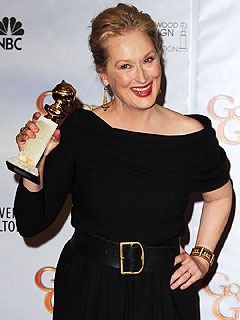