Well Miss Meryl has been quite the jet setter lately.  I actually don't remember if I knew that in addition to her appearance at the Rome Film Festival earlier this month that she would be also be attending the Japanese premiere of Florence Foster Jenkins at the Tokyo International Film Festival. 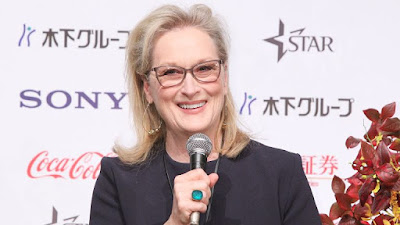 It's good to see that Streep is trying to keep Florence visible in the press, continuing a pattern of fervent promotion she has undertaken following the film's European release this spring.  By most accounts it would seem likely that she's gunning for her record 20th Oscar nomination, a possibility that became much more likely following the news Sunday that Viola Davis would be campaigned in supporting for Fences.  More on that in a future post very soon.  Let the games begin.