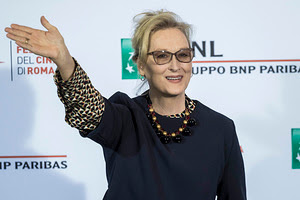 Looking good as always, Mer.  The Hollywood Reporter's article covering Streep's appearance quoted her making a few comments about the current U.S. presidential election.  As we know, Meryl has been vocal about her support for Hillary Clinton, and in the interview, she doesn't hold back on what she thinks of Donald Trump:

"I don't feel that I have to make any further pronouncements on the sexism of the Trump campaign.  I think they're doing a very good job on their own. Or he's doing a good job on his own. I'm not sure his campaign knows quite what to make of it, but I feel in 20 days we'll have a President Hillary Rodham Clinton, president of the United States, and all this will be moot."

Love her.  Streep further lent her hand this week in drawing criticism to Trump for his treatment of women in a 'Humanity for Hillary' commercial.  She's literally in it for two seconds starting at 2:25.

I don't usually give a ton of coverage on this blog to Meryl's political leanings, but I think in this case it bears a shout-out.  #I'mWithHer
Posted by Jeff at 8:33 PM