We're three days into shooting.  Someone on the Julia Roberts forum posted that one of the first scenes to be shot takes place at a local hospital.  Apparently it's a funny scene with the three daughters discussing their mother with a doctor.  Realizing that they're likely shooting out of sequence, I'm guessing this scene may be the one at the beginning of Act Three in the play.  Violet (Meryl) has seen a doctor about her pill addiction and the three girls are chatting about it.  Barbara (Julia) recalls the time that her mother smuggled Darvocet into the psych ward by hiding it in her vagina.  The forum poster remarked that the scene is a "great showcase for Julia."  That may be, but if I'm right and this scene is indeed the one I mentioned from act three, then Roberts would basically be trading an equal number of lines with her two sisters (Juliette Lewis and Julianne Nicholson)...and the entire conversation is about Meryl's character.   Of course in the play this scene takes place at the house, but things will no doubt get changed a bit for the big screen.

George Clooney has been obliging the locals with pictures, and I happened to find this pic of Ewan McGregor as "Bill" on the Meryl Streep forum.  I don't know who the dude on the right is.   I'll be very interested to see how they physically portray Meryl as Violet.  Stay tuned. 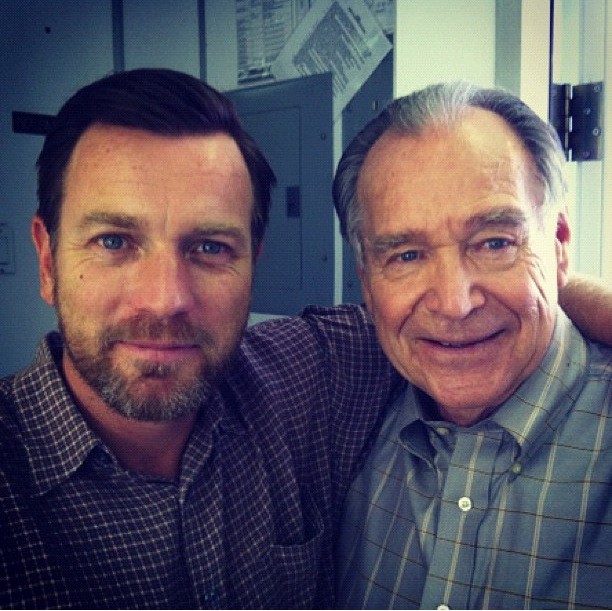