IMDb is now showing that Florence Foster Jenkins will be released in the United States on August 31.  That's a Wednesday.

OK this seems bizarre.  The film has a wide-release set in the U.K. for May 6, almost four months prior.   I don't think it's weird that the month of August was chosen, I'm just confused as to why there would be such a large gap between wide releases.  It's not like it's premiering in Cannes in May or at some other festival first and then going wide in the States.  And yes, different countries often don't get films until months after their original premiere, but this seems unprecedented for a Meryl Streep film that will seemingly be a fairly mainstream pic that's set in the U.S.  I realize that the picture was filmed in and produced by companies in the U.K. but it's still perplexing.  For all we know this could change.  More to come. 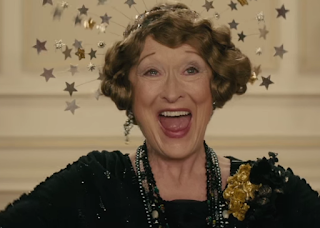