The post title refers to the fact that I'll be briefly touching on a handful of random topics.  The first is that last night Joe and I were pleased to be invited to our friend Annie's place for dinner and Meryl.  She selected Adaptation.  We all thoroughly enjoyed it of course, along with the delicious roasted chicken apple crisp!  Thanks again, Annie.  Joe astutely observed how Meryl in particular had the difficult task of portraying a real person (Susan Orlean) for the first half of the movie and has to completely switch gears and then portray someone who really has no connection to the original character's motivations and typical behavior (hope I didn't butcher that, babe).  I commented that it was likely good practice for what would be her upcoming participation in Angels in America, where she took on the task of four different character depictions.

In other news, tickets for the Twin Cities Film Fest's showing of August: Osage County go on sale tomorrow.  It's showing Saturday, October 26.  I'll be out of town that weekend, but if anyone is in the area and gets a chance to attend, report back!

Lastly, I saw an article today which claimed to show a "first look" at Johnny Depp as the Wolf in Into the Woods.  As you can see from the photo below, I'm guessing he's not actually in costume.  The second pic shows Jack's "beanstalk."  Filming is currently underway in and around London. 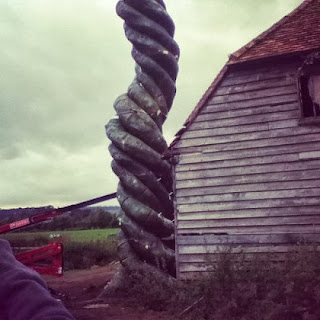