Sizing up supporting actress: Margot Robbie in "Once Upon a Time in Hollywood"

When I posted my thoughts on a pair of contenders in the Best Supporting Actress category last week, I totally forgot that I saw Once Upon a Time in Hollywood in early August. Margot Robbie is getting some buzz for her role as slain actress Sharon Tate.

Directed by Quentin Tarantino, the film is a sort of reimagining of characters and events surrounding the Manson Family murders, which took place in the summer of 1969. I actually really enjoyed the movie, and thought Robbie did a fine job. The only problem is that she's barely in it. I get that the character is historically well-known, and that the Academy tends to wet themselves over films depicting their industry. But there just isn't enough for Robbie to do here.

I expect there have been plenty of pundits out there who've broken down why and how Robbie might get the nod. What Robbie does she does well. It would be very difficult to convince me, however, that it's a worthy performance. Not that screen time is the only thing that constitutes a good role.  But this is not Judi Dench in Shakespeare in Love or Viola Davis in Doubt. There is so little interesting or difficult in Robbie's portrayal. No arc. No big speech or super emotional moment. That, coupled with low screen time, does not an Oscar role make. 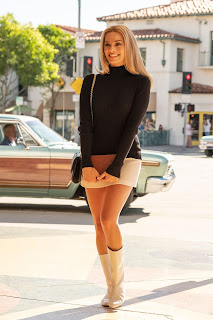 If she gets in, I expect it to be more understandable if its for Bombshell, which opens December 20 (and I cannot wait to see).

My ranking of the performances I've seen thus far: