The much-anticipated second season of HBO's powerhouse limited series Big Little Lies began filming in mid March. There have been a few articles recently indicating that production is still underway, but that it's likely wrapping up this month. Three months sort of seemed like a reasonable length of time, but when I consider that it's almost seven hours worth of programming, that's actually a pretty swift schedule. This photo of Meryl with a Monterey resident is a few weeks old,  but it's the first time I've seen it anywhere: 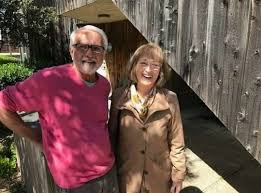 Nicole Kidman's Instagram photos of her and her costars out bowling has been making the social media rounds today as well.  I had a lazy afternoon yesterday and just happened to watch the last episode from season one and it is so damn good. This is going to be a wonderful thing to look forward to for several weeks this winter.