Who will Streep play in "The Laundromat"?

It was announced two weeks ago that Meryl had been tapped to star in The Laundromat, a "fact-based" film directed by Steven Soderbergh and based on the book Secrecy World: Inside the Panama Papers Investigation of Illicit Money Networks and the Global Elite. I haven't found any other information since the announcement that describes who we can expect Meryl to portray.  I had mentioned in the comments of my original post that the most likely character seems like it would be journalist Daphne Caruana Galizia. She helped lead the release of the Panama Papers, which had demonstrated tax evasion efforts by a law firm based out of Panama called Mossack Fonesca. Her involvement unfortunately got her killed, as she was murdered in a car bombing last October.

Galizia was Maltese, which of course means she's from Malta. I had to actually look at a map online to see exactly where it is. It's a little Southern European island in the Mediterranean Sea not far from Sicily. I've watched some video of Galizia and this would mean another fun accent for Meryl to master, one I certainly never conceived she would undertake. In the videos and other pictures I've seen, it crossed my mind that I'm not sure if we'd consider Galizia white? I certainly don't want Meryl embroiled in a whitewashing fiasco for a role, but if it does end up being Galizia that Meryl is playing, I think this will fall more along the lines of playing an Italian (Francesca in The Bridges of Madison County) or a Greek (Maria Callas in the never-produced Master Class). Perhaps more challenging will be that Galizia was 53 when she died. Meryl turns 69 in a few weeks (but that's basically the same spread for when she just played Katharine Graham).

I haven't read the book yet, but my understanding is that Galizia is only mentioned briefly in it. That being said, who knows what's all going to be in the movie, as the articles announcing Meryl's potential participation described her character as the "emotional throughline" of the film. I don't know if that means a leading or supporting role. We also know that Streep is familiar with Galizia's work, as Meryl played tribute to her and other slain journalists a few months ago for "paying the hardest price for their questions."

Again, however, the character Meryl plays could be a completely different person! But it just really seems like this is the most likely. Netflix is in the running for distribution rights and filming is evidently planned for this fall. Looking forward to learning more hopefully soon. 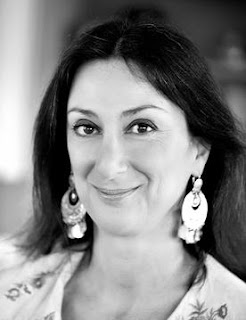