By 2009, Meryl had become incredibly overdue for a second Lead Actress Oscar. She came close for 2008's Doubt, but came up short that year behind Kate Winslet in The Reader. With her acclaimed performance in Julie & Julia only a year later, it seemed early on like Meryl might actually make it. She'd been lauded by multiple film critic circles and the film itself was generally well-received, including a fantastic box office performance.

Sadly, Sandra Bullock swooped in with very little critical praise for her performance in The Blind Side to basically sweep the television awards that year, winning the drama Globe (Meryl won comedy), SAG, BFCA (tied with Meryl!) and the Oscar. I hadn't realized until checking for which awards Bullock had been nominated that year and saw just now that she wasn't even nominated at BAFTA.  I guess that's not super surprising, considering The Blind Side is a distinctly American movie.

OK let's keep it real. This performance should not have come anywhere near an Academy Award. I love me some Sandy Bullock, but I maintain that this award was more of an industry recognition for the fact that she'd been a box office powerhouse for nearly twenty years. The Blind Side also did extremely well in theaters and had that helpful Best Picture nom with the Academy, versus the solo Actress nod for Meryl in her movie.

Wonderful speech and Bullock looks stunning. It was sort of a fun little back and forth that she and Meryl had during that awards season, as Sandra made fun of the often over-hyped way people tend to pit actresses against each other. As she told Oprah the morning after her win, she wanted to diffuse that nonsense when they both tied for the Critics' Choice win by kissing Meryl. It was cute.

Honestly, the biggest disappointment for me in all this is that the role Bullock should've possibly one for was 2013's Gravity. It was a way better movie and way better performance, and while she was nominated, it was very unlikely that they were going to award her twice. Had she not won for Blind Side, I think it's very possible that Cate Blanchett would still be without a lead win. 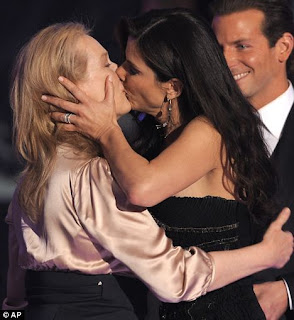