Hot off the news that Meryl earned her (own) record-breaking 21st Academy Award nomination yesterday, HBO announced this afternoon that Streep would be joining the cast of their ratings and awards juggernaut, Big Little Lies for season 2.

I'm dying. I absolutely LOVED this show. I watched the entire first installment, then intended to be a limited series, in a single day last summer and thought it was one of the best I'd ever seen. Now that they've picked it up for a second season, apparently the mother of abusive Perry Wright has been added into the mix, which is the role that Meryl is set to play. Interestingly, the character's name is Mary Louise, which happens to be Meryl's real name.

From what I can gather, Mary Louise comes to Monterey looking for answers after her son's death. No doubt we'll get to see Meryl in some great scenes with Nicole Kidman. There's no official word yet on whether there will be any flashback scenes with Perry (played by Alexander Skarsgård), but I'll bet Skarsgård is hoping to high heaven there are, as he'd get to share the screen with the queen.

I'm not sure when filming is set to begin, but I imagine sometime this spring or summer. The second season will air sometime in 2019.  Curious to see if we get any updates on The Nix as well. If so, it could be quite the couple of years at the Emmys. 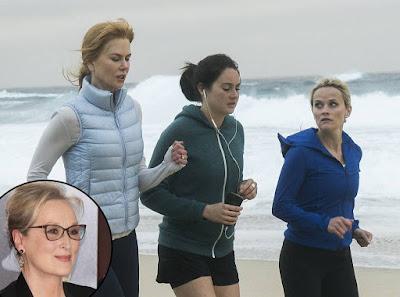