Last night, Meryl attended the premiere of HBO's documentary "Spielberg." While this may not be particularly momentous news, I'm commenting on it because it adds to the buzz surrounding Spielberg's upcoming film, The Post, which of course stars our girl. The documentary is set to air on HBO tomorrow night (October 7), and I'm not sure if Meryl will be in it. She did briefly work with Steven in a cameo voice role in 2001's A.I. Artificial Intelligence. I'm guessing the documentary was primarily produced prior to their pairing for filming The Post this summer, but I have a feeling that Meryl will be included, thus her presence at last night's premiere.

Still desperate waiting for that trailer. 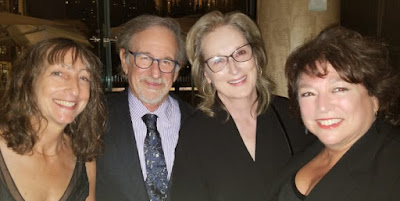