First look at Meryl in "The Papers"

Some lucky woman who was apparently late for work snapped a selfie on an elevator with Meryl (on her birthday no less) and Tom Hanks while the two were in costume on the set of The Papers. 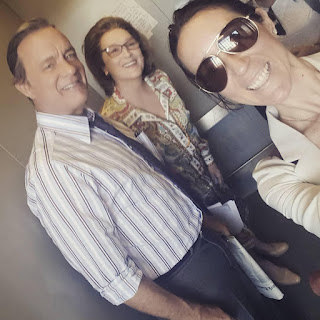 It looks like Meryl is wearing her own glasses, but that hair and dress are extremely 1970s.  She of course will be portraying publisher Kay Graham, while Tom Hanks plays editor Ben Bradlee.  Despite this being a non-official still, it's nice to get a glimpse of their looks.

Thanks to Sean L for alerting me to the pic!
Posted by Jeff at 12:00 AM