Behind the scenes look at "Mary Poppins Returns"

Entertainment Weekly is running a cover story on Mary Poppins Returns.  In it, they apparently give us some behind the scenes info on the making of the film.  There's a link to a few new production stills as well.  Although we don't get a glimpse of Meryl in character as Topsy, we do get a shot of her at the piano with Emily Blunt and Lin-Manuel Miranda: 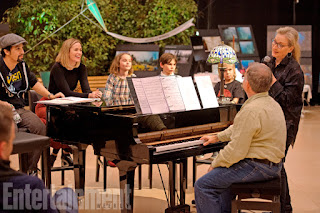 After watching the below video, I'm actually kind of getting excited to see this film.  I'm a great fan of the original and the sequel's production value looks exquisite.  Only a year and a half to wait!