Streep to team with Spielberg and Hanks for "The Post"

Oh. My. God.  It's hard to believe that the blacklist script I discussed two months ago might actually be filmed with Meryl.  Not only that, but Tom Hanks will co-star and Steven Spielberg is going to direct.  Multiple sources are reporting that The Post is set for production, to be co-financed by Fox and Amblin Entertainment.  Based on the Washington Post's publishing of the Pentagon Papers in 1971, Streep would portray publisher Kay Graham, with Hanks as editor Ben Bradlee.

It's not a huge surprise that this script interested Meryl.  The subject is very topical, in that it follows the process of the press trying to keep politicians honest.  And although no specific timeline has been revealed for filming, the Deadline article linked above states that they will "fit this into Spielberg's busy schedule soonest."

So thrilled to have a feature film lead role in the works for Meryl.  More to come soon I'm sure. Ahhh! 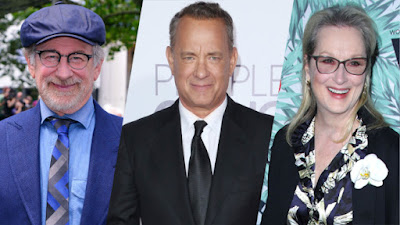