Joe and I are happy to have survived a three-day wilderness adventure in the Boundary Waters. A quintessential Minnesota experience that was beautiful but a LOT of work.  Needless to say, I was completely cut off from all "web" exposure, and of course there are several things to cover in regard to Meryl news.

Firstly, The Giver has arrived in theaters nationwide.  Rotten Tomatoes currently has it at an awful 29% based on 97 reviews.  I can't say that I thought would be a critical hit, but I didn't expect it to to be received quite this poorly.  The real story will be told by box-office returns, and early estimates have it grossing around $12-15 million for its opening weekend.  Not bad, but not great.  I'm seeing it with Scooter tomorrow evening and I'll report back Sunday with my review.

Secondly, Rob Marshall has answered some long-standing questions from concerned fans of the upcoming Into the Woods.  Big take aways: it sounds like they may actually be keeping the true adult, dark themes intact.  The Baker's Wife still has a tryst with Cinderella's Prince, and Rapunzel, although it appears that she does not die, still has a dubious end.

More specifically, the new song Stephen Sondheim wrote for Meryl as the Witch has been cut from the film. I originally had a disappointed reaction to this, but I feel that if deleting the song improves on the film as a whole...ditch it.  Reports from early screenings were that it was a bit slow, so whatever it was probably natural do excise new material, especially when the original is so close to perfect.

To accompany the news from Marshall, a new still of the Witch and Rapunzel (likely from the Stay With Me scene) was revealed. 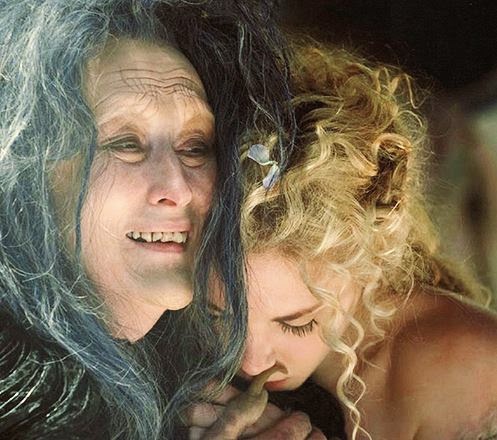 Finally, upon reentering cellular service this morning, I was shocked and excited to see that Meryl was attached to a film involving former Indian Prime minister Indira Gandhi.  Turns out the role was not Indira, and the article was from the "Mocktale" section of The Times of India, which are "works of fiction intended to bring a smile to your face." Wrong.
Posted by Jeff at 10:57 PM

Email ThisBlogThis!Share to TwitterShare to FacebookShare to Pinterest
Labels: Into the Woods, News, Rumored Projects, The Giver