Multiple sources revealed yesterday that Sigourney Weaver and Kevin Kline have been tapped to star in the film adaptation of Ann Leary's 2013 novel, The Good House. For regular readers of this blog, you probably know that I've been holding a bit of a candle for this project for six years now, ever since it was announced that Streep was set to start alongside Robert De Niro. I had pretty much given up hope of ever seeing this story reach the screen, and when I woke up this morning to an alert on my blog that it had been recast, I wasn't really sure what to think.

My first thought was how out of the blue this seemed. I'd assumed this film had died and gone to development hell. But from what I understand, filming is already underway in Canada. The film will be directed by married couple Maya Forbes and Wally Wolodarsky (I know, who?!)--there never had been a previous director attached. Amblin Partners is producing, with Universal handling distribution. Michael Cunningham had been reportedly working on the adaptation in 2013, but the articles I've read suggest that Forbes and Wolordarsky wrote the script. My guess is that the director pair revised Cunningham's original adaptation.

While I'm excited to see this story brought to the screen, I feel it's an unfortunate missed opportunity for Meryl. Nobody knows how the film is ultimately going to pan out, but I'm very familiar with the book, and have for years now found is protagonist, Hildy Good, a fascinating character. Shes a 60-something realtor on Boston's North Shore: successful, strident, a mother, grandmother, divorced from a gay husband, descended from Salem witches, purportedly psychic, and desperately trying to hide her love affair with alcohol. Imagine Meryl negotiating this woman!

After reading the novel when it was announced Meryl was attached to the film adaptation, I've regularly revisited parts of the story, thanks to the amazing audible version narrated by the great Mary Beth Hurt. It's become a nostalgic story for me. With its historic town, numerous fall and winter scenes, witty dialogue, and comprehensive characterizations, it's a setting that's become  entrenched in my mind.

My hope is that the film does the story justice. I remember hearing Ann Leary in an interview a couple years ago saying that it was still in the development process, and that the producer, Jane Rosenthal, really wanted the script and characters to be as perfect as possible. It'd be great if the reason it's taken six years to go into production was because they were doing just that. Weaver is of course a brilliant actress, so I look forward to her interpretation of the role. On paper, it seems the type of project and character that would garner a lot of attention.
Sadly, The Good House has gone the way of other projects from the not-so-distant past for which Meryl was originally attached. The Last Station, Saving Mr. Banks, and Julieta all ended up being made with other actors in the main roles. In recent years, I had expected The Good House to fall more along the lines of Daughter of the Queen of Sheba, Dirty Tricks and Master Class, all of which have never reached the screen.

I hope Let Them All Talk and The Prom end up being worth Meryl missing out this fall. Lord knows there are a thousand possible reasons why she never stuck with the project (see The Last Station et al.). Regardless, when The Good House hits theaters in 2020, I'll be one of the first in line. 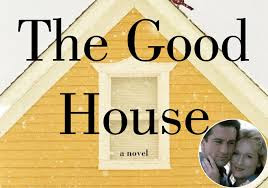