"The Laundromat" premieres at Venice

Yesterday, Steven Soderbergh's Panama Papers comedy The Laundromat premiered at the Venice International Film Festival, and Meryl was on hand for the event: 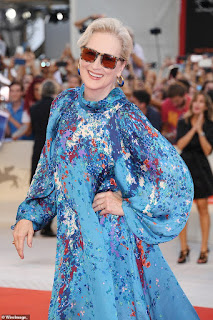 Looking stunning as usual. There are close to a dozen reviews for the film already counted so far, and in general, the responses are decent. Its score on Metacritic is only 59 with eleven reviews, while at 58% on Rotten Tomatoes, with twelve. Hopefully the score goes up a bit in the next few weeks. While Meryl is getting good notices, her chances for awards recognition go down if the film isn't as well-received.

Next up is the Toronto International Film Festival later this week. The film will be in select theaters September 27, and will be available to stream on Netflix on October 18.