No Oscar for Meryl and first trailer from "Mary Poppins Returns"

It's not like anyone was expecting Meryl to win, but last night she lost for the the fourth consecutive time at the Academy Award, bringing her overall total to 3-for-21. Congratulations to Frances McDormand, who, as expected, took the Best Actress prize for her performance in Three Billboards Outside Ebbing, Missouri. This was McDormand's second win, after 1996's Fargo.

Streep looked amazing on the red carpet, and of course got mentioned in host Jimmy Kimmel's monologue. Hard to believe it was just under a year turnaround from when it was announced she would be starting in The Post to when the awards season wrapped up. That's some crazy quick work. The quest can now begin for Meryl's next nominated performance. My guess it will be in something she has yet to announce. 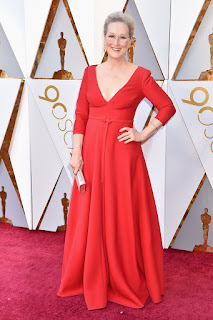 The only real upset was The Shape of Water taking Best Picture over Three Billboards. Not a huge surprise, considering Guillermo del Toro won director, while Martin McDonagh (director of Three Billboards) wasn't even nominated.

In other news, the first trailer for Mary Poppins Returns was revealed during the Oscar telecast.  It's not much more than a teaser, as we barely see Emily Blunt and none of the other main cast members except for Lin-Manuel Miranda. I hope that we get a full trailer or at least a few stills of Meryl's character Topsy within a month or two.