Now that we're approaching October, performances that will contend for Best Actress this year are actually becoming available to view. Namely, Jennifer Lawrence in mother! and Emma Stone in Battle of the Sexes. Since Meryl is going to almost certainly be on everyone's radar for her upcoming performance in The Post, I'm planning on providing my two cents this fall on many of the possible frontrunners.

Meryl's performance may ultimately be the last I actually see, since it's not going to be released nationwide until mid January. Similarly, Margot Robbie's performance may not go wide until a similar time, but it's been seen by many people already at the Toronto International Film Festival and we know that I,Tonya is likely going to be a factor.

This year is particularly stacked with notable performances from women on screen, something that is not always the case. Cracking into the top five in votes for the Best Actor category on Awards Watch generally indicates a much-lauded performance. With the preponderance of male-led films each year, it can be difficult to stand out. It's nice to see that on the women's side it's far from a done deal as we approach the last quarter of 2017.

I'm going to start my assessment of this year's performances with one I was actually able to rent already on Itunes: Salma Hayek in Beatriz at Dinner. Before it was released, it was predicted that Hayek might be in the mix for awards, and she still may be, but the buzz has dwindled significantly. It doesn't help that the film was a summer release. But as a dark comedy, her role might show up at the Globes, and with some calling it "the first great film of the Trump era," I think it's worth covering.

I don't want to get into a super detailed synopsis, but the story surrounds Beatriz (Hayek), a holistic healer who's car breaks down at a wealthy client's home, resulting in her staying for dinner and interacting with three couples who represent stereotypical privileged whites whose biggest concern seems to be whether to decide on halibut or steak for dinner. Beatriz in particular clashes with Doug (John Lithgow (this guy's having a great year)), a CEO-type real estate magnate whom Beatriz at first mistakes for the man who ruined her Mexican town with his predatory development. Things get awkward as she uncomfortably confronts him on his way of life.

Hayek does a wonderful job in this picture. Her performance provides such a sharp contrast to the setting and viewpoints of the other main players. She's a healer, sensitive to needs and pain of other living things. Thrust into a scenario where she's surrounded by people who are anathema to everything she believes about the world, Beatriz can't help but draw attention to that contrast and shine light on the carnage that can be left behind from unbridled American capitalism.

I don't expect this film or Hayek's performance to go too far with awards. If anything, as I mentioned, a nod for Best Actress in the Musical/Comedy category is a possibility, but even there I see her as coming in at number six or seven currently. Again, it's a stacked category in 2017. In most other years, she'd likely be in the conversation for an Oscar nom. But it's anyone's guess as this point... 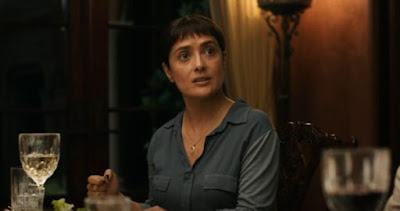