The British Academy of Film and Television Arts announced its nominations earlier today and Meryl made the cut with her performance in Florence Foster Jenkins.  This makes is fifteen BAFTA nominations for Streep overall, having won twice, for 1981's The French Lieutenant's Woman and 2011's The Iron Lady.  Congrats to Hugh Grant as well as he was nominated in the Supporting Actor category.  The other ladies nominated alongside Streep were:

I read somewhere that Globe winner Isabelle Huppert was apparently ineligible for BAFTA this year, as her film Elle was not yet released in the UK.  I think that's why we see Emily Blunt on this list, plus she's a Brit.  Interesting fact that Streep has never received nominations for Golden Globe, SAG and BAFTA for a film without then getting an Academy Award nod, so she is in very good shape at the moment.  Oscar nominations are announced two weeks from today on the 24th. 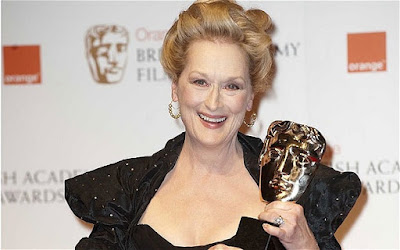