"The Laundromat" to premiere in Toronto

Multiple sources are reporting today that Steven Soderbergh's Netflix drama The Laundromat will premiere at the Toronto International Film Festival, as one of its "Special Presentations." We also got our first official still from the movie, with Meryl in a solo pic: 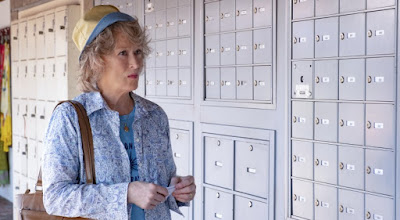 We still don't really know how big Meryl's role is going to be in this film. It seems likely that it's more than a glorified cameo, considering she's always listed first when the film is discussed in print. The fact that she's also the one shown in the first official still, maybe she's actually going to be closer to lead?  That would be amazing and exciting. Regardless, it's fun to know we'll have reactions and/or reviews from the film in just about six weeks.

TIFF runs from September 5-15, and The Laundromat is set for release in theaters and on Netflix on November 1.
Posted by Jeff at 11:22 AM