Deadline is reporting that French actor Louis Garrel is joining the cast of Greta Gerwig's upcoming adaptation of Little Women. No word yet on Garrel's character however. With the addition of James Norton several weeks ago, we now have two actors in their 30s whose roles have not been revealed.

Timothée Chalamet has already been said to be portraying Laurie. I'm not super familiar with the book, but a quick search doesn't really leave many options for whom Garrel and Norton will play. Professor Bhaer is described as middle-aged, so I doubt it's him (although in the 1860s, 35 was probably older than "middle' age?). The other likely options are of course John Brooke, who ends up marrying Meg (I'm guessing Norton for that), and then maybe either of the Vaughan brothers. Fred and Frank Vaughan are English twins, but I don't think Frank is ever really seen, just mentioned as Fred's twin brother. Fred courts Amy in Europe which sparks Laurie to up the ante for her affections as well.

Laurie and Fred are supposed to be friends from Harvard, so it's tough to picture 22 year-old Chalamet as a schoolmate to 35 year-old Garrel. Although it's not as if they're sticking to the original ages from the book anyway. All of the actresses who play the sisters are older than their written parts.

Filming begins in just a few short weeks in Boston, so all these questions will be answered soon enough! 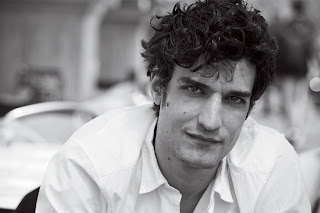