Last night I happened to notice on the Gold Derby forums that someone had made a comment about the possibility of Susan Sarandon starring in a film about former Indian Prime Minister Indira Gandhi.  So of course I did a little snooping and found several articles from last summer, all from Indian sources, that suggested director Natty Kumar was working on a biopic of Gandhi and wanted Sarandon for the role.   It got me thinking about how compelling it would be to see Meryl in such a role.  On paper it seems a no-brainer.  Biopic, world leader, Hindi accent, Oscar-bait.  From the articles I found, there was no indication that the film was actually moving forward or if Sarandon had even been approached.  It doesn't seem like the type of role Susan would lean toward, but who knows?

After doing some research on Gandhi, I learned that she has no relation to Indian nationalist/pacifist Mohandas "Mahatma" Gandhi.  She was also considered by many to be a socialist and nepotist, and overall I get the sense that her tenure is a divisive topic among Indians. Most striking to me, however, was the resemblance between Gandhi and Streep: 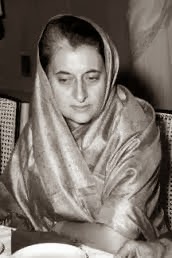 That nose!  How could Streep not be considered if a screen depiction of this woman were to come to fruition?  Last month there was some news that a Bollywood film based on the Sikh riots that resulted from Gandhi's assassination in 1984 (rumored to be titled October 31) was set to begin filming soon.  I've seen no confirmation that it's actually happening.  If a Hollywood production ever came together and Streep were hired for the role it would be her second role as a head of state, following her Academy Award-winning performance as Margaret Thatcher in The Iron Lady. Perhaps we'd end up with a "female world leader" trilogy after Hillary Clinton is elected in a couple years?  Yes, please.
Posted by Jeff at 12:03 PM