Thoughts on production of "The Nix"

My copy of Nathan Hill's novel The Nix arrived today.  I'm excited to begin reading and being that it's been about a week since it was announced that the book would be turned into a limited series starring our girl, I thought I'd add a few more thoughts.  To my knowledge, there hasn't been any additional info on the details of the project since the day it was announced.  All we know is that J.J. Abrams would be producing (along with Meryl?), it it going to be on television and that Abrams would likely direct at least "a few" episodes.

Certainly there's a lot of info we can find on the actual plot of the story, and readers are of course welcome to explore that info to whatever level of detail they choose.  I'll likely create a post or two as I discover the 600-page tale, but will be sure to add spoiler alerts.

Big things we don't know for sure:  who will write the screenplay, how many episodes there will be, on which network it will air, who will direct, when shooting is likely to begin and of course, who else will star.  The main character sounds like it's actually the son, Samuel, but from what I understand both he and his mom, Faye, seem like leads.  No doubt I'll be picturing Meryl whenever her character is present or referenced in the story, but I'll have to wait and see who comes to mind to portray Samuel.

Thinking about how glad I am that we have at new project to obsess talk about, I couldn't help but look back to the fall of 2014, just after it was announced in October of that year that Streep had signed on for Florence Foster Jenkins.  We essentially had five major projects that were either about to or expected to come to fruition: Into the Woods, Ricki and the Flash (which was filming), Florence Foster Jenkins, The Good House and Master Class.  Now I'm just hoping beyond all hope that The Nix actually sees the light of day, as we know nothing is ever guaranteed.  Considering the fact that Meryl may be co-producing, I agree with a commenter here that it may be more likely to happen if Streep has a stake in the production herself.

Until we get confirmation, I'll just have to remain patient and enjoy envisioning Meryl in the pages of The Nix. 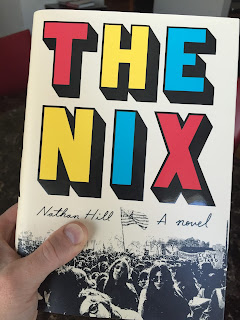 Email ThisBlogThis!Share to TwitterShare to FacebookShare to Pinterest
Labels: Florence, Florence Foster Jenkins, Into the Woods, Master Class, News, Ricki and the Flash, Rumored Projects, The Good House, The Nix